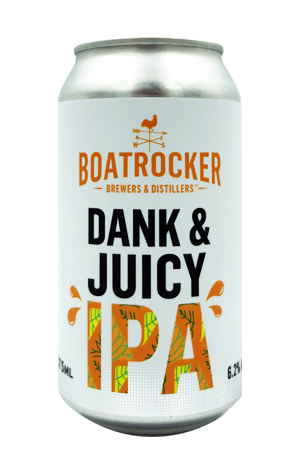 Boatrocker continue along the path of giving some of their beers names that are as much descriptors as mere titles, as Dank & Juicy IPA follows the likes of Dank & Bitter and Sterk & Donker into the fold. They've been on quite a tear with IPAs in 2019 and, if you've been following along at home, you might spot elements of Nexus here in a beer that delivers on its promise – particularly the "juicy".

Densely hazy and awash with fresh citrus aromas and lovely tropical fruit flavours (derived from late and dry-hopped additions of Nelson Sauvin, Galaxy and Mosaic cryo hops) wrapped up in a soft, smooth texture (thanks to heaps of oats), it's another well judged IPA from the Braeside team. The "dank" plays second fiddle to the juicy fruits, while there's an easy-going bitterness that aids the speed at which it's likely to disappear from your glass.