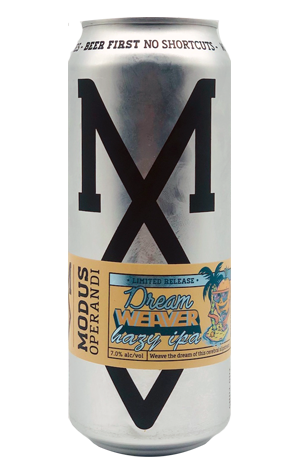 In a world of nonstop new releases, with a fresh NEIPA around every corner, it takes confidence, courage, and quality to re-release a hazy IPA. Luckily Modus Operandi have all three, and have channelled them superbly into this year’s Dream Weaver.

There have been some minor changes to the recipe, as hinted at by the slight change in the name from “Unfiltered IPA” to “Hazy IPA”. The biggest change was switching yeasts to London Fog (which seems to be revealing itself as one of Modus’ favourite strains), which adds haziness and fruity esters to further boost the flavour. Apart from this, some tweaks to the hops and timing of the dry-hopping were the only alterations.

Since it was one of Crafty Pint’s Best New NSW Beers of 2018, we’re pleased about what’s stayed the same, even with a change of brewer at Modus. It’s still the Modus beer with the most dry-hopping per litre. It still has that slight haze, like that halo-esque effect in movies when someone dies and gets a peek into heaven. It still has super lively flavours of sweet pineapple and orange, with bitey pine coming in behind. It still has a slow build up of bitterness, and yet it still somehow gets easier and easier to drink as as you make your way through it - though maybe that’s just the 7 percent ABV going to work.