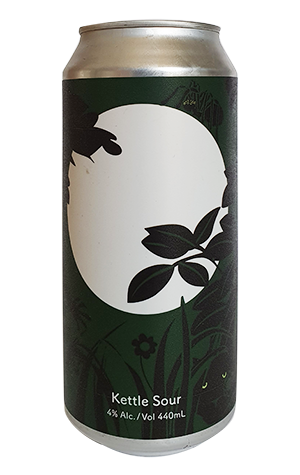 A little more than a month after their first can release Tallboy & Moose have let another deftly decorated tinnie into the world. This time around, the Preston brewpub have skimmed through their brewlog and plucked out Zing Tang. The Berliner Weisse was first brewed close to two years ago has inspired some zingy spinoffs using other fruit, but the original was a beer fueled by kaffir lime and lemongrass and the American hop Lemondrop.

Taken together, those elements provide a lot in the way of mostly sherbet-like citrus flavours. There’s also a hint of rosewater or Turkish Delight to be found in there, all of which is set against the beer’s tart base.

Head to the brewpub and you'll find two new beers on tap too. A lager and a double IPA might seem worlds apart but, as two of Tallboy & Moose’s most recent releases show, very different styles can still occasionally rhyme. Zee Pilz is a 5.3 percent ABV pilsner that spent a full six weeks lagering away in tank and was treated to a fair hit of Hallertau Mittelfruh late in the kettle. Thus the beer’s spicy and floral hop flavours are quite prominent, while a slight sweetness is balanced out by the beer’s prominent bitterness.

Eagle Vs Kiwi, on the other hand, might be a bigger beer but it’s also a release focused on letting hops shine. Brewed by Scott Trainor, winner of a Merri Mashers IPA competition, the 7.5 percent ABV IIPA is made with a mix of America’s Citra and New Zealand Kohatu hops. Those two combine for a mix of peach, citrus and pine in a beer that also has its own sweetness balanced out by a big bitterness. Two very different hoppy, bitter beers.