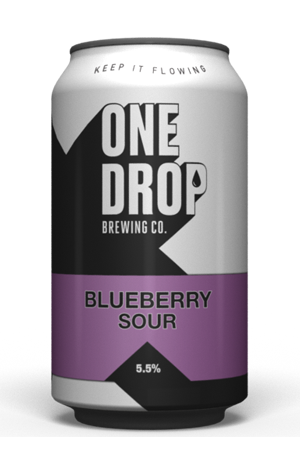 Almost immediately after opening, One Drop sent off some of their first batches of beer to be judged at the Australian International Beer Awards… and scored a clutch of gold medals for their troubles. They were the only Australian brewery to win a gold medal in the Fruit Beer category, for their limited release Blueberry Sour. Of course, that batch didn’t last long - can you blame anyone? - so One Drop has done us all a favour by brewing it again.

It sits in the glass a deep crimson tinged with purple, the solid colour undisturbed by its low carbonation. The taste resembles grape juice or Ribena, with the sweetness balanced by a light tannic feel and a pluck of tartness in the back of the mouth.

In many ways, it’s a surprisingly simple little thing. But to work with the ingredients - including around 200g of blueberries per litre - and achieve such a balanced profile, such rounded flavours rather than just a sour blast? No mean feat.