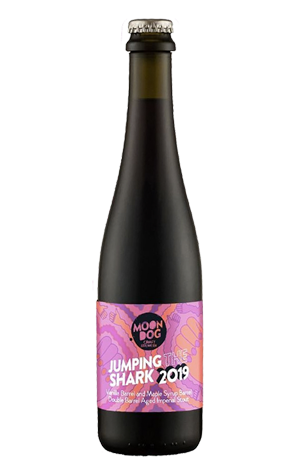 How do you jump the shark when, from the very off, doing just that was part of your schtick? In the case of Moon Dog, it was to create a series of beers even bigger and more batshit crazy than those they were releasing already. The Jumping The Shark series kicked off with a barrel-aged imperial stout weighing in at more than 15 percent ABV that was loaded with truffles and ended up with an AIBA gold medal. There's been the odd miss along the way, with The Fonz failing to stick his landing when he overloaded on saffron one year, while they've taken to hiring a giant inflatable shark slide for the brewery when they launch the beers these days; to enter the bar, you have to use the slide...

The 2019 edition sees them return to the realm of barrel-aged imperial stouts, this time employing two types of barrel: one that once held maple syrup, one vanilla. For me (and I do have a weakness for the stuff), it's the former that takes the starring role, adding an oxidised sherry character atop much else: it's boozy, figgy, chocolaty, rummy and even offers flashes of Amaretto on the nose, while there's drying bitter chocolate and charred grains attempting to poke through the treacly liquid.

It's another chewy beast in the series and will likely mellow into itself over time too.