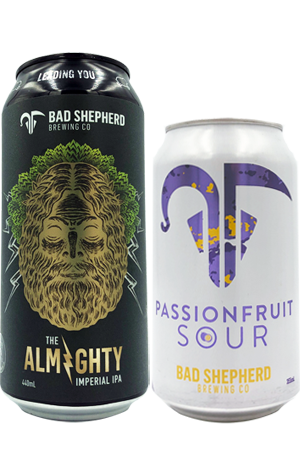 The Almighty has long been one of Bad Shepherd's most highly-anticipated seasonal releases and one of their best. And, as it leaves the Cheltenham brewery once more for 2019 – complete with Hop God on the cans – that's the case again. It's another tightly wound IIPA, sitting at just 8.5 percent ABV this year but with 100 IBU of bitterness squeezed in, that's a long way from the hazier, juicier beers that have dominated the IPA landscape in recent times. Golden and pretty clear, there's pineapple, tropical and pine aromas, but they're not overly effusive and are joined by some alcohol-derived spiciness. There, booze, hops and biscuity malts to taste, not to mention a potent drying bitterness.

Leaving the brewery at the same time is a tweaked and new look version of the Passionfruit Sour that first appeared as Brew Crew Series 7. There's a vibrant fruit aroma rising from its pillowy white head and a fullness to said aroma – eyes closed, it could be a passionfruit sponge cake under your nose. Fruit runs right through it, like Brad and Robert's river (obscure, showing one's age reference for you there), with the tang little more than you'd get from the fruit itself, despite the lactobacillus added to the brew.