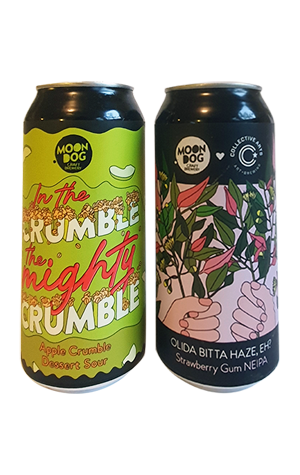 The inventive name well at Moon Dog shows no sign of slowing down as the brewery releases two very different (but aptly named) cans. There’s In The Crumble, The Mighty Crumble – an apple crumble sour with lactose, vanilla and cinnamon. Making its way into the world at the same time as the Lion King remake looks rather well planned and it's hard to question how well the beer captures the dessert in a can. The tart apple catches you first, then leads into the sweeter flavours, the vanilla and the cinnamon.

Olida Bitta Haze, Eh is a collaboration created with Collective Arts when the Canadian brewery was in town for Adelaide’s Beer & BBQ Festival. It's a NEIPA with an Australian twist, brewed Strawberry Gum (or Eucalyptus olida), a tree native to the Northern Tablelands in NSW. Strawberry Gum oils are regularly used to make perfume or food additives thanks to their fruity musk and the plant's often sold as a superfood too. Combine the gum with the hop Idaho 7 and you get a superb mix of passionfruit, juicy stone fruit, strawberry and pine in a golden, hazy beer.