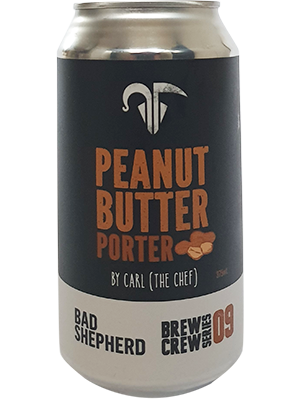 For the ninth iteration of their Brew Crew series, Bad Shepherd have given recipe rights to Carl, the brewpub’s head chef. An American football fan, Carl supports the Ohio State Buckeyes and the very American-sounding sweets that share that teams name: Buckeye Candy.

According to the internet, Buckeye Candy is peanut butter fudge that’s been dipped in chocolate. So to create a beer in its (and Carl’s) honour the Bad Shepherd team went for a porter base before adding the necessarily level of nuts. Anyone who’s ever fiendishly tucked into peanut butter brittle or some Reese’s Pieces will find what they're looking for here. Pouring dark brown, the sweet peanut butter character leaps from the beer first, quickly joined by a creamy chocolate body.