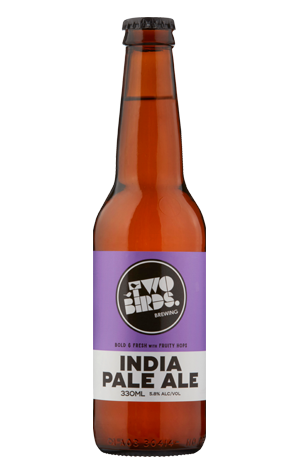 I never understood the meaning behind the phrase “going through a purple patch”, but Two Birds Brewing is undeniably in one, if at least literally with two purple-labelled beers released to coincide with their eighth birthday.

One is a beer that will be sticking around: an IPA to replace the retired Golden Ale in the core lineup. It's influenced by classic West Coast IPAs, which in this modern hazy world may seem a little old fashioned, but it’s a style that continues to work. It uses a trio of hops: two American (Cascade and Citra) and one Australian (Galaxy).

You’ll find citrus flavours in the form of orange pith and lime, plus a decent hit of tropical fruit and a touch of pine underpinning it all. It’ll scratch any IBU itches you have without dominating your palate or any accompanying food. For fans of WC IPAs it will be satisfyingly familiar, and could easily serve to win newer drinkers over to the style.

The second birthday beer is an imperial gose and you can read about that here. For those playing at home, we won't go into all the theories as to why a string of success or good luck is known as “purple patch". But in this case the idiom is more than appropriate.

Available year round wherever you find Two Birds beer