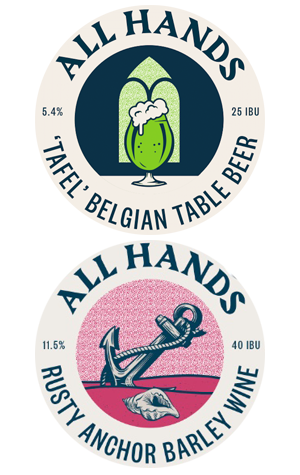 Table beers generally do three things very well: they’re easy-drinking; they go well with food; they’re inconspicuous, staying out of the way so as to allow conversation to flow freely. Tafel does two of these well.

Easy-drinking? Definitely. While it’s heavier than your average table beer, it retains the refreshing and quaffable quality that gives this style its charm. Goes with food? Absolutely. There’s a mild fruitiness coming through from the blend of two yeast strains, and an interesting nuttiness from the Voyager malts. A sip of this is like chomping down on a handful of walnuts, with an earthiness, light bitterness, and hint of spice ready to pair with a sharing board of bread and dips. As for inconspicuous? I’m afraid not. This beer will certainly interrupt your conversation, pinging at your curiosity until you can pick out the different flavours swimming around your mouth. (For the first pint or two, at least.)

For a beer that’s less pint-with-dinner and more middy-with-dessert, turn to the Rusty Anchor Barleywine. The name captures both the deep reddish hues of the beer, and the way it’ll weigh you down and hold you firmly in place – though you may sway a little in the current.

This sophisticated drop reaches the depths of flavour you look for in a barleywine: dark molasses, burnt raisins, even a touch of cola. The sweetness is restrained, though, never reaching cloying levels. Instead, the inclusion of Manuka smoke tempers the sweetness with an almost savoury note. Sip this beer as a sleepy sea captain would sip on a glass of port while at anchor on a still night.