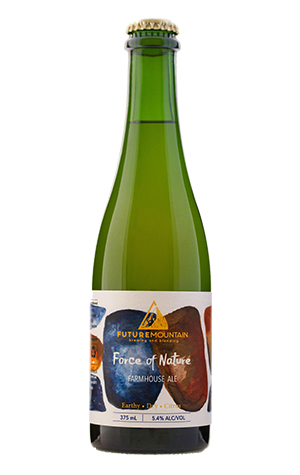 A farmhouse ale made in an industrial Melbourne suburb might sound like a contradiction but, if the farmhands of Belgian were drinking anything like Force of Nature, we’d wager they wouldn’t mind. Indeed, if this is what they were drinking in Belgian farms more than a century ago, it sounds far more appealing than the life of someone on an Australian farm work visa.

Built upon a mixture of cultures cobbled together in Future Mountain’s lab, any fans of Brettanomyces-laced saisons will likely find what they're after in Force of Nature. There’s a subtlety that allows the Brett's lighter, more fruit-driven side to shine through: with a mix of lemon, orange zest and pear, it’s almost like a vibrant young pinot gris, underpinned by the appealing, drying hay like funk that can be a characteristic of such beers.