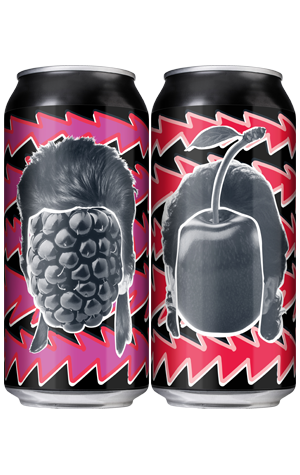 Having been resurrected for summer 2019, Moon Dog's Magnificent Mullets welcome two more members to the band in the shape of David Boysenbowie and Cherry Seinfeld. And together they make for the most garish pair in the lineup to date.

Boysenbowie pours a lurid crimson, reminiscent of an outpouring of blood in an early Sam Raimi movie; even the head takes on a pink hue. It leads you to expect a punchier aroma, but the creamy side of the lacto turns the fruit character into one more akin to a boiled lolly – a sensation it shares with Seinfeld. The boysenberry is more to the fore on the palate, both a little sweet and a little tart, but "refreshing" would be the one word above all you'd plump for. At least after luridcrimsonsamraimiblood (if you were taking a Germanic approach to language).

Cherry Seinfeld slides into your glass in shades of a blood grapefruit / Tequila Sunrise-after-you've-stirred-it (thus making the barman's efforts redundant) nature and, again, is subtle on the nose, with a touch of a light French table wine alongside the creamy boiled lollies. Cherries can make good bedfellows with sour beer styles and here contribute to an easy-drinking, mildly-puckering addition to the Mullets, with a hint of funk in its midst too.