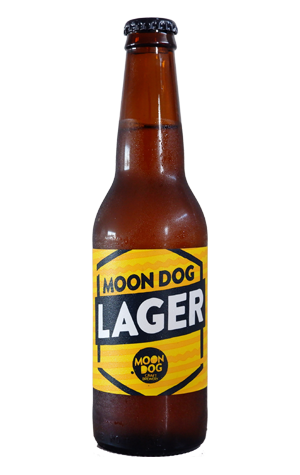 Gather 'round, people, I'll tell you a story. A seven-year story of lager and hops...

It starts in 2012, when Moon Dog went against their grain and released a lager. Except they didn't really as Love Tap was a very Moon Dog lager: 7.1 percent ABV and coming on like what we described at the time as "hop goo". Over time, said beer was revised again and again, typically towards something approximating a "normal" lager – at least in terms of alcohol content, as the hops remained of a New World bent – and became a beer you'd often find pouring as a Happy Hour offering at pubs and bars.

And now, having already added "RETIRED" to our listings for Love Tap and Love Tap II, it's time to lay the dapper pig to rest for a final time as the brewery team has decided it's time for a normal, normal lager. One they're calling... Lager.

The new beer is still hoppy, it's just the weapons of choice are of the old school, floral and softly spicy variety, laid across a simple malt base, contributing a balancing bitterness and, well, delivering an enjoyably lager-like experience. Back how things used to be before people came along with daft ideas like 7.1 percent ABV, hopped-to-the-goofballs lagers.