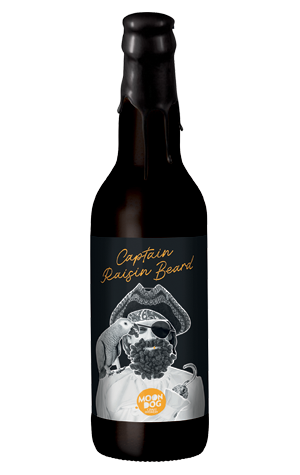 They've brewed many a big beer over the years at Moon Dog, and a fair few imperial stouts too. They've tried to get their hands on as many different barrels – and have developed a fine line in daft characters to adorn them. Here, in their 2019 Good Beer Week beer, they've combined all four in creating Captain Raisin Beard.

He's big – 12.9 percent ABV, no less. He's an imperial stout, with a density of the "none shall pass" ilk. He's spent time in barrels, in this case rum barrels sourced from Trinidad and Barbados. And he's a character, complete with parrot, two dollar store pirate gear and a beard made of raisins. What's more, you can smell him coming, although he's no salty sea dog, rather a booze-soaked, rummy old bugger who appears to have been sloshing around in the bowels of his Brigantine.

As a drink, it sits more in boozy dark chocolate liqueur than aggressively bitter or roasty territory, perhaps down to the softening effects of vanilla, while there's hints of Amaretto, dark fruits and even Grand Marnier on the nose. Wantonly boozy, yet not as hot as it has every right to be. A bit like you might imagine yourself after finishing a bottle.

Launching at Bar SK on May 10 then heading nationwide