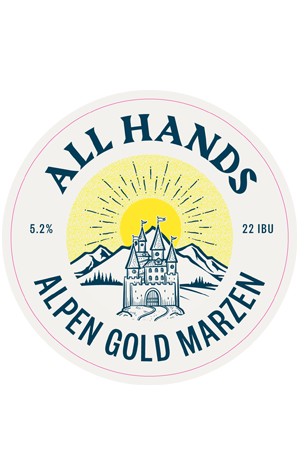 Märzen was traditionally brewed in March, during the German springtime, then stored away to be enjoyed in autumn, after summer had passed. Being in the Land Down Under with the seasons back-the-front, All Hands has had to fudge the dates a little to make it work, but has brought out a Märzen to welcome the cooler months and leave summer as nothing but a memory.

Seven weeks lagering in tank has given Alpen Gold an enviable clarity. The slow rise of the bubbles is mesmerising to watch, much like the unhurried falling of snowflakes in a snow globe. But instead of cold white, you’re met with warm orange-gold, sparkling and inviting and reminding you that this is an autumn drink, not a winter one.

This Märzen doesn’t have the same heaviness as some of its Bavarian counterparts, instead opting for a cleaner feel more suited to the Australian palate. The Vienna and carapils malts still bring in some of that traditional honey sweetness, but it has a restrained delicateness to it. Someone unfamiliar with the style can taste this beer and think of it less as a weird sweet German beer, and more as a lager with extra oomph – a little more body, a touch of honey and biscuity character, a grainy finish that leaves the palate dry and clean.