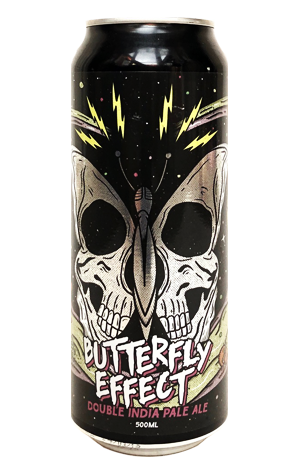 KAIJU! were the first of many collaborative partners for Brisbane's Newstead and have been at it again, this time using the former's Milton site for the first time to create the heavily hop-driven Butterfly Effect. While labelled a double IPA, it's based on an American wheat ale, albeit one that's been ratcheted up to 8.5 percent ABV and had Simcoe, Citra, Cascade, Mosaic and Enigma hops "jammed in all over the place".

The resultant character brings a dank and grassy vibe, one that’s resinous and robust. It’s like opening up a bag of hops and sticking your nose in. While there's an undercurrent of strength, there's not much in the way of malt sweetness, with a slightly oily base that allows the hops to shine through as the star of the show. Piney, with some citrus, this is in stark contrast to the black American wheat the duo collaborated on in 2016: here, it’s fresh and vibrant with a powerful grassiness carrying a beer that's all about the hops.