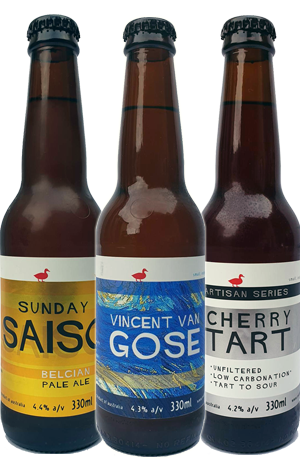 Their Kilderkin spirits business might be keeping them busy, but you can't keep the brewing urges at Red Duck under wraps for long. Thus, there's three new beers doing the rounds, all of them paying homage in one way of the other to the Old World, though well placed to be consumed in the current Australian beer climate.

The Vincent Van Gose, brewed with pink salt flakes and Davidson plum, a native Australian subtropical fruit. Considering the style’s origins lie in Germany’s north, there’s much about a gose that makes it the right kind of beer for Australia’s heat, and Vincent is no exception, with a stewed rhubarb-like tartness, light herbal notes and refreshing, slightly salty finish.

Speaking of refreshing, European-inspired beers, keeping Vincent company is Sunday Saison, a beer suited to the end of a Sunday session in the garden. It mixes a floral spiciness with cloves and a slight whiff of bubblegum, before finishing dry.

Then there's Cherry Tart, a kettle sour made with Morello cherries, a fruit often found in baked goods that's been turning up in booze for centuries too. It pours with a vibrant red hue and its highly effervescent body packs a solid sour punch, with flavours that float between red grape, almond and plum.