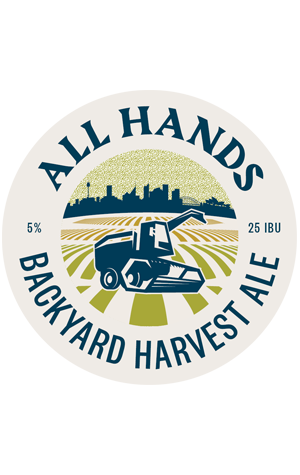 When done right, by people who care about their craft, beer’s truly an agricultural product. As valuable as consistency is on a commercial scale, there’s something special about the variation we can see in the ingredients, and the transience of flavours that comes from particular ingredients at particular times. This is most evident at hop harvest time, when many breweries source fresh local hops to bring that paddock-to-pint factor to some of their brews.

Backyard Harvest Ale is one of these farm fresh beers. Using base malt from local legend Voyager, this beer’s stuffed full of 50kg of wet hops – a combination of Cascade, Centennial, and Chinook – which were picked by hand at Ryefield Hops near the Snowy Mountains. From there the hops were driven straight to the brewery, where the brewers used the mash tun as a hopback to draw all of those precious fresh hop compounds into the beer.

While the brewers expected something more citrusy and piney from these American styles of hops, the end result of the beer was much more earthy, with the Centennial coming through most clearly. A rich nuttiness and grassiness lend unexpected depth to the bright, golden liquid.

This beer isn’t something you stick in a bottle, stack on a shelf, and store for 12 months to sell all year round. This is a beer you drink right here, right now, savouring the seasonal flavours from the local producers. This is the taste of the land.