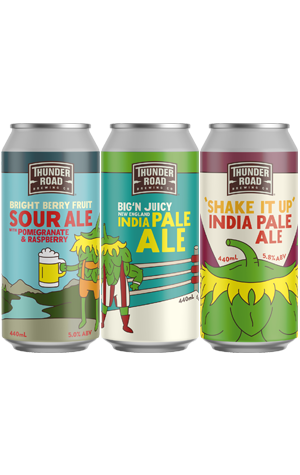 Thunder Road might be best known for their down-the-line Brunswick Bitter but anyone who’s stepped foot inside the brewery’s Brunswick home in recent times would have been greeted by a whole gamut of beer styles. The brewery’s limited edition “Brewhouse” series is designed to showcase that diversity in the shape of brightly-coloured 440ml cans featuring a humanoid hop, and is being launched with a triplet of beers.

The first among them is Bright Berry Fruit, a Berliner Weisse made with pomegranate juice and raspberry puree. We’d wager they’ve been added in particularly large quantities too, thanks to the beer’s pink hue and strong flavours of both pomegranate and raspberry. It’s not a particularly mouth-puckering sour – instead, it sits more on the tart and refreshing side, designed for enjoying as what's (hopefully) the last of one of Australia’s hottest summers transitions into spring.

Big ‘n Juicy is one of two IPAs in the cluster, a New England IPA that comes with a malt bill including wheat and oats, joined by a dash of lactose. It’s one that pours pale, thick and cloudy enough to fit into the hazy category and, on the juicy hop front, has flavours of mango and orange to the fore. With no real bitterness to speak of and – possibly thanks to the lactose – a lingering sweetness, it makes for a beer that's not worlds removed from a glass of breakfast juice.

Number three in the series is Shake It Up, a milkshake IPA hopped with Mosaic and Galaxy and enlivened by the addition of mango and passionfruit puree. Upfront, a sweet vanilla character is most apparent, before a light mix of tropical flavours come to the fore.