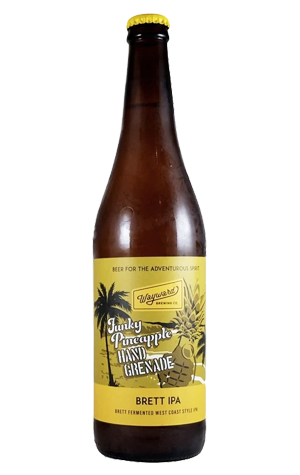 Funky Pineapple Hand Grenade Brett IPA... the name alone is a mouthful but what of the beer itself, which has returned in a limited run in the latter part of summer 2019 after debuting as a GABS festival beer in 2016? Well, first up, a clarification: there's no pineapple involved, at least not in fruit form. Or, indeed, hand grenades. But it does feature Brett and is, thus, a little funky.

Essentially a West Coast IPA with a twist, the beer was fermented with nothing but Wayward's favoured Brettanomyces strain and pours with the requisite dense haze du jour and the hue of an overripe pineapple. Initially, if you've poured it chilled, there's little in the soft pineapple and mango aromas to hint at the aforementioned funk. It's more on the palate, where there's a tannic dryness and a vinous quality at play texturally, that you'll appreciate the twist. As the beer warms, farmhouse characteristics akin to a Brett saison become more apparent and the mouthful of a name makes sense.