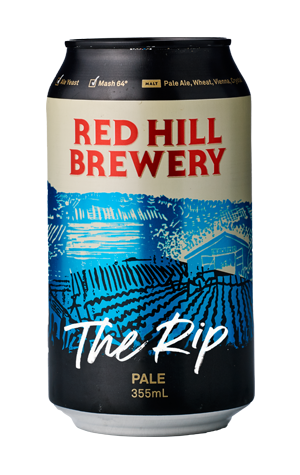 Red Hill didn't just rebrand at the end of 2018, the brewery started by Karen and Dave Golding almost a decade and a half earlier also ventured into cans for the first time. One of two beers chosen for tinnie time was this pale ale, The Rip, the first time they've slotted such a beer into their core lineup.

It's one that sits very much in the light and easy-going camp: clean and tropically hoppy, with passionfruit and pineapple leading the way, it's a gently bitter beer with sessions in mind. In a manner similar to Pirate Life, they're using the rim of the cans to inform drinkers of the ingredients and brewing process, while there's a mention of "Pacific" in the descriptors too, if you're wondering where inspiration might have come too.