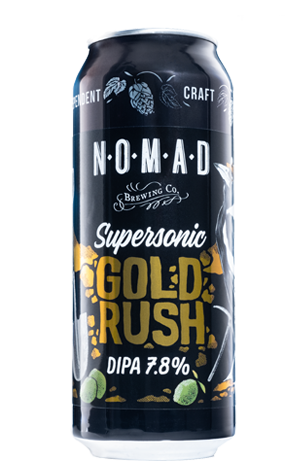 It’s been near enough four years since Nomad’s Supersonic double IPA first landed on the scene, though it’s only relatively recently the beer seems to have really discovered its wings. In 2018, the Brookvale brewery has resurrected and reinvigorated the original concept by releasing the beer in an expanding collection of one-off editions that explore new hops, native ingredients and even a collaboration with one of their favourites American brewers, Stone.

The latest in the Supersonic family is Gold Rush, a desert lime edition to follow and further complement the previous finger lime and rainforest lime versions. And the lime is pleasingly lively in this one, a zippy, zesty citrus character running through from beginning to end to add an unfading sense of interest and refreshment. Yet the beer remains a double IPA at heart, the El Dorado hops leading the charge (backed by Citra and Vic Secret) to push those hoppy citrus flavours and create the necessary dank and resinous impression. In some ways it feels like the citrus was playing off against the bitterness for domination before both agreed to just shake hands and be mutual partners. For all that focus, the malt is no afterthought here as it’s formed from the kind of sweet mix which made May’s Supersonic Maverick release so frighteningly drinkable for a beer of its size.

With Nomad’s Supersonic series now plotting a reliable course, here’s hoping they’ve got a few more lined up on the runway.