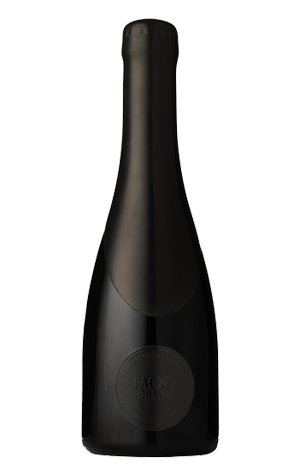 Tasmania's Moo Brew was one of the first local breweries to experiment with barrels, putting out very limited volumes of barrel aged stout each year in the first half of the decade. In the past few years, as the brewery has continued to grow and made the transition to cans, as new beers have arrived and others have departed the scene, the annual Stout has remained an ever-present – but an oaked companion hasn't followed. At least not until now with the launch of a new partnership with Sydney's Archie Rose.

The young distillery has, for the most part, made a name to date on the back of its gins but has been around long enough that the first whiskies have left their barrels. So, earlier in 2018, they sent a shipment of freshly emptied Single Malt Whisky American oak casks to Moo. They were filled with imperial stout, which was given enough time to soak up the former resident's character (and for head brewer Dave Macgill to grow a hearty beard) before being transferred to heartily wax-dipped bottles that manage to come across as both elegantly austere and wantonly imposing.

It's a combination that's suitable preparation for what follows, with the dense, black liquid one that possesses a spirituous edge – brewer Dave suggests it's a beer that will improve with cellaring and, indeed, in future releases once they have more vintages with which to play. Yet it's ready to go now too, with the top notes of young whisky riding a wave of rich chocolate, dark roast and a creamy lusciousness imparted by the ex-bourbon barrels. There's just 1,800 bottles in existence so, if you're feeling a little indulgent...

You can read our recent article on the blurring of lines by craft brewers and distillers here.

Available via Moo Brew online or at MONA