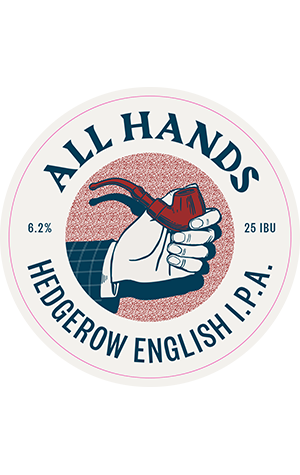 The Australian beer world has become increasingly Americanised in recent years, from the hops we use to the trends we follow to the number of US brewers who have shifted south to ply their trade Down Under. One of them, Sam Clayman, heads the brewing team at All Hands and, somewhat unusually, he has a soft spot for British style beers. That’s partly the reason why the Darling Harbour brewpub is one of a small handful of breweries in Sydney to always serve up cask ale and it’s also why they tend to flirt with a few more English ingredients than many of their peers, whether it be malt, hops or yeast. And it’s to these they turned in the creation of the Hedgerow IPA, a beer that offers something familiar yet distinctly different to the highly hopped American IPAs drinkers have become so accustomed to.

You do get a nice dose of the bright and punchy modern fruit character on the aroma from the Brambling Cross hops, but also from the English yeast. It’s on the palate where it does its twist, pulling you aside with a rye spiciness that teams up with a subtler caramel malt sweetness. Then it’s got an almost old school level of bitterness, a dark and earthy edge that lingers for ages afterwards. If you’re looking for an IPA that’s a little askew of the current trend dominated by massive tropical fruit character, head down the lane that leads to this Hedgerow.