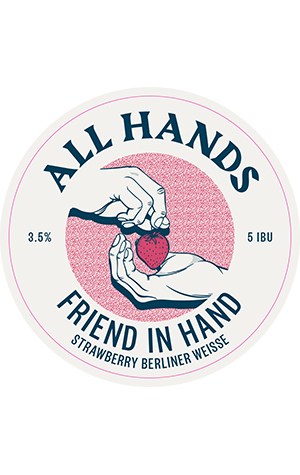 A couple of months ago, some asshole, or assholes, somewhere in Australia decided it would be a fabulous idea to start sticking sewing needles in strawberries for some cheap laughs and in the process crippled an industry and prevented the rest of us from indulging in one of life’s simplest pleasures: gobbing a perfectly ripe strawberry whole without fear of getting a piece of sharp metal lodged in your throat. Fuck youse. Anyway, wanting to show a little solidarity with the strawberry farmers, the brewers at All Hands got themselves 400 kilograms of berries – a veritable mountain – and made up a beer. They opted for a Berliner weisse and called it Friend In Hand.

Now, one doesn’t just hurl in that quantity of strawbs without some prep. All those pesky peduncles have to be lopped off the top so as to reduce the risk of adding potential bitterness or herbaceous character and spoiling what you want to be a light, bright and fruity beauty. To chop 400 kilos of berries took them a full ten hours and probably diminished much of the enthusiasm they had for the concept initially. But bashing away at the buckets of berries with a pile driver sized mixer from the kitchen soon put some smiles back on the dials. After that everything went into tank and sat there stewing for a month to extract all the flavour it could. And boy did it do that.

The first thought when drinking this beer is something akin to slurping down a liquified fruit strap. It’s got a roaring strawberry flavour. But where fruit straps get sickly sweet pretty quickly, this bends back away from the brink thanks to the Berliner’s refreshing acidity and pleasant dryness that has you coming back for more. Given it’s only 3.5 percent ABV, Friend In Hand is – as they say in the parlance of our times – super smashable.