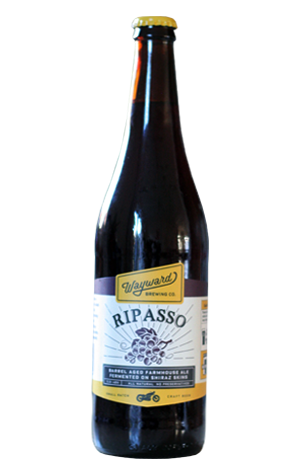 Ripasso is best known as a wine – or winemaking technique – of Italian denomination. It’s quite regional and varietal specific but, without going into the minutiae, essentially sees wine re-fermented on the marc (the skins and stems) of pressed grapes used to make a different wine. In a practical sense, the idea is to use the fruity dregs to add some extra colour, character and strength. And that’s pretty well exactly what’s gone on with Wayward’s Ripasso. Except, of course, they’ve added it to beer.

They got their hands on more than a half tonne of shiraz marc from Tyrrell’s in the Hunter Valley, added it all to a reasonably benign Belgian ale base beer and let it ferment in tank. Following the conclusion of the primary fermentation they dug everything out, put it in oak puncheons and pitched an additional, wilder yeast blend that head brewer Shaun Blissett had wrangled up while visiting yeast specialists in the USA earlier in the year. Then it was just a case of waiting until it was ready to bottle.

Ripasso is ruby red and full of fresh, vibrant and deep fruit flavours – cherry and plum and dense dried fruits, an almost fortified character that aids in the impression of sweetness. But, once you move past the initial sharp red wine fruit feeling, the mid-palate takes on much more of a beer’s body, a bit fatter and fuller. It then pulls in tannins from the oak and finishes vinous and dry – but perhaps not with as much acidity as you might expect. The wild yeast doesn’t so much present outright Brettanomyces character as it just adds a bit of depth and intrigue – though it feels like the yeast still has a bigger part to play here if you’re able to put a few bottles aside and give them time. As it stands, this is a beer that straddles the beer/wine divide to the point where it ends up not unlike a sparkling shiraz.

For all that’s good and great about traditional ales, it’s stuff like this which makes the contemporary beer world an exciting place.