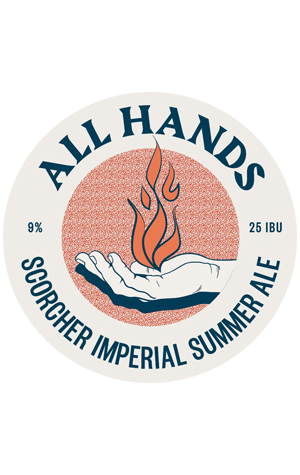 Every now and then you look along the taps at All Hands and one beer catches your eye in the way the new Barangaroo development stands out above the Darling Harbour skyline outside the brewery. It’s just much bigger. That, in this case, is Scorcher.

It’s been labelled, for reasons of familiarity more than anything else, an Imperial Summer Ale, the idea being that it gives regular drinkers of their Summer Ale an indication that this is a similar beer, but more substantial. In another brewery it might be called an imperial IPA. But whatever you call it, it’s nine percent ABV so there’s no mucking around.

Built on whacking great piles of El Dorado, Mosaic and Simcoe hops it’s a miscellany of delicious tropical fruit characters, apricot, stone fruit and citrus. With an almost imperceptible bitterness and a mellifluous touch of sweetness, it drinks with utter deception. There’s little reason to believe it’s as strong as it is. Captivating and just a little dangerous, this is fire that’s fun to play with.