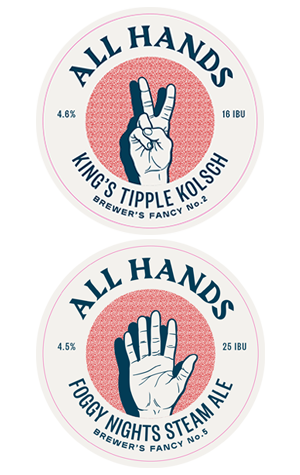 The brewers at All Hands have delivered two new beers that are much like non-identical twins; thrust into the world together and an endearing pairing but ultimately worlds apart.

The first is the King’s Tipple Kolsch, their homage to the classic Kölsch beers of Köln. As such, it uses a German yeast as one of its main character building components and that, along with noble hops, has helped deliver aromas and flavours of pear and apple that round out to a crisp finish marked by a fine bitterness. Having spent more than two months conditioning, it's got impeccable clarity and appears the perfect shade of pale – a stereotypical image of “beer” if ever there was one. Being lithe and clean with delicate balance, it’s not a beer that’ll have the beer cognoscenti lining up outside the doors. But for those who know how to accept pleasure through restraint, it’s one that’ll reward from first sip to last.

Of a similarly easy-going nature but approaching from a very different direction is the Foggy Nights San Francisco Steam Lager. This is a homage to the iconic Anchor Steam Ale, a beer that head brewer Sam Clayman has fond memories of drinking while growing up in his native USA. Trading on those memories has seen the creation of a beer that pleases on the malt front with caramel leading the charge; first with its colour then lightly in the aroma and finally on the palate where it mixes with a slightly nutty, toasted character. Fermented at a higher temperature than your average lager but at a lower temperature than your average ale, the yeast – apparently sourced from San Francisco for added authenticity – gives off woody and fruity characters. All of this combines in a mellifluous body and a thick creamy head that makes Foggy Nights a beer that seems to gets more interesting the further you get down the glass – make it a pint, if possible.