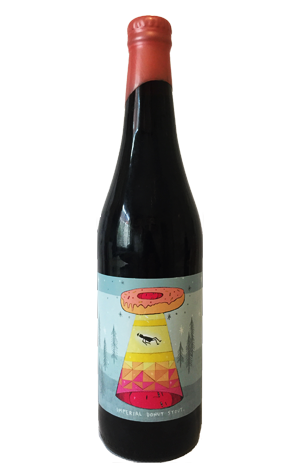 For their fourth annual winter collaboration, Eagle Bay, Mane Liquor and artist Kyle Hughes-Odgers have taken the idea of a pastry stout to its literal conclusion by inviting the Mary Street Bakery team to join them. Yes, the name is a giveaway, although these are not your average donuts. Over the past few years, the artisans have greatly raised the standard when it comes to cinnamon sugar dusted circles of dough so the inclusion of 150 of the bakery’s fluffy, four-inch treats in this imperial stout is a generous contribution, to say the least.

Considering just how many donuts went into the beer, the result is surprisingly dry. Hallmarks of cocoa and dark chocolate are evident, while cinnamon becomes more prominent as it warms, aided and abetted by a cinnamon quill addition. The full mouthfeel supports mild roasty characters and alcohol is hidden, only showing up late on, with the dry bitterness providing balance.

This year’s Kyle Hughes-Odgers artwork is the first to use colour and finds a figure being abducted – presumably in a rainbow of flavour - by a donut, an experience with which Mary Street Bakery visitors are all too familiar.