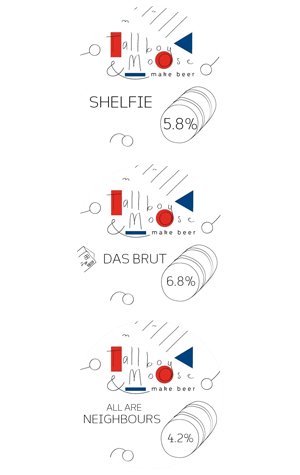 With a small system and a guiding principle that a brewpub should always be willing to experiment, Tallboy & Moose aren’t afraid to release multiple beers at any one time, frequently of a diverse nature too.

That's the case with this new trio, where the most malt-focused is Shelfie, the brewery’s take on a German altbier or latzenbier (shelf beer). Pouring a deep copper, the beer has a sweetness up front and a touch spice from the hops, which add just a touch to the aroma and leave the malt to drive the beer.

Then there's the brewery’s first go at brewing a Brut IPA: Das Brut. It also happens to be the driest beer the brewery has ever brewed. That allows a triumvirate of German hops, Mandarina Bavaria, Huell Melon and Hallertau Blanc to go work driving the beer’s flavour. The most prominent of those are citrus and melon and, with next to no bitterness, it’s an 6.8 percent ABV beer that goes down incredibly smoothly.

Completing the picture is All Are Neighbours, a ryebread pale ale made with Northcote bakery All Are Welcome. For the collaboration, Tallboy threw 30kg of the bakery’s rye sourdough into the mash tun along with some Cascade and East Kent Golding hops for good measure. The result is a very traditional English style pale ale, with herbal, floral characters, a decent bitterness and a touch of spiciness, potentially obtained from the rye.