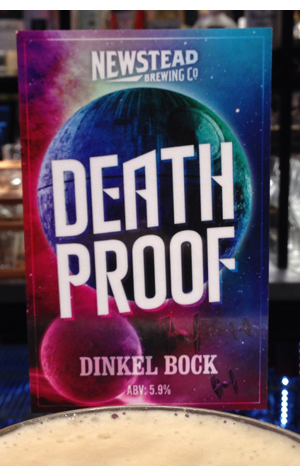 When a biologist uses an ancient grain to brew a beer called Death Proof, it sounds like a Bond villain working on an immortality serum. But then he gives it a daft style name like Dinkel Bock so we won't take it seriously.

Death Proof is the first beer brewed at Newstead by Evan Goulden, a former marine microbiologist and one of the newest brewers at Newstead. He's used spelt, an ancient grain used to brew beer millennia ago, and put it in a Bock, a German strong lager that's been around since Medieval times. The result is a spicy malt creature with dark fruits and a subtle nuttiness: a dark beer from the depths of the ages, dripping with history and finishing dry.

Possibly the concoction of a megalomaniacal mad scientist... but, teehee, Dinkel Bock.