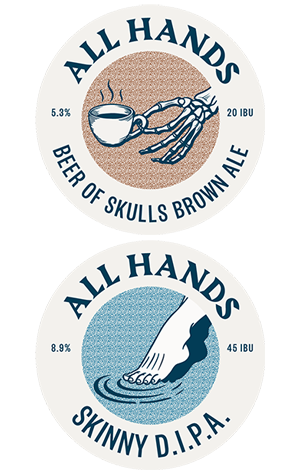 The All Hands brewers have reached for the pep-up powder for Beer Of Skulls, a brown ale made in collaboration with Victoria’s Cartel Coffee Roasters. The name is a play on the origins of the coffee component; beans were sourced from a grower in Burundi called Gitwe Hill, which apparently translates in the native tongue as the rather ominous Place Of Skulls.

Coffee is often added to stouts and porters, where the rich and deep flavours integrate seamlessly with the natural characters of the malts. With a brown ale, the associations aren’t quite so stark; it’s just a little lighter in character, a little sweeter in nature. When being prepared for the brew, this particular coffee was apparently quite light in colour, something of a surprise to the brewers – and no doubt anyone else accustomed to peering into a total void of colour while sticking your nose into a regular shot of short black. But, for these purposes, it was entirely suitable, allowing for more distinction of flavours. So with Beer of Skulls you have coffee characters that almost feel as though they’re running a step ahead of the rest of the beer. As you sip away, you have deep, earthy fruits and dark berry character before the burnt roast comes roaring in behind. While the flavours being pursued here are inherently intense, they’ve been applied with a light touch.

The other new beer on tap at All Hands is one that shows how a good name can be a great asset for a beer. It can mean the difference between someone choosing your beer or their beer. This pale ale or that pale ale. The label becomes the frontline in the battle for hearts, minds and mouths. But it has to be backed up by what’s in the glass. Once poured, the beer is nothing but naked and exposed. The only way to impress is by force of character.

Skinny DIPA works on every level. It’s funny and suggestive. It plays on the style. It pulls you in. And, once you’re in, you find more than you bargained for. You find it’s not so skinny after all. This is a big, chewy, resinous beer piled to the gunwales with tropical fruit character. This has more hops than any All Hands beer that’s come before – and by some margin. Six different varieties went in; three in the kettle, another three as dry hops. And in high doses. So, yes, it’s bitter, but not gritty. A steadying touch of caramel keeps it from tipping over. It’s still a big beer though, so take it slow. Just dip your toe in.