Beer All Hands Dunkel In The Rye 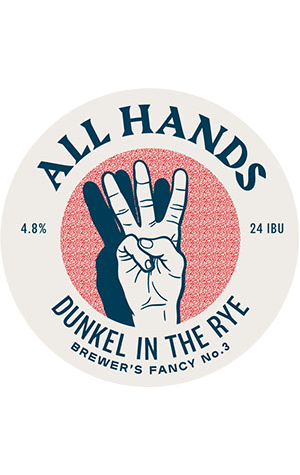 Beers like this don’t seem to come around too often. Firstly, it’s a dunkel – a dark lager – which is a style few Aussie brewers choose to tackle with any regularity. Second, it’s made using three varieties of rye malt, two of which were limited releases from the Kiwi maltsters over at Gladfield that evidently aren’t yet readily available (Crystal and Chocolate varieties, plus some standard Rye, if you’re interested in the details). Thirdly, it’s been lagering for a long time – much longer than commercial realities allow for most breweries; two months have passed since the beer was first tucked away in its fermenter.

And you’d have to say it’s been worth the wait – although upon your first sip you might not necessarily think so. That’s because it comes out of the taps pretty cold, which might be fine for someone with an urgent thirst to quench but this is a beer that benefits greatly from a little patience. Given a few minutes to shake off the chill, it begins to behave a bit like a peacock fanning its tail, transitioning from having a clean, crisp and fairly innocuous character to something considerably more showy, displaying a range of malty complexity which touches on chewy caramel, chocolate, light roast and rye’s customary spicy kick. Despite appearing crystal clear thanks to all that time in tank, Dunkel In The Rye has bucketloads of depth, particularly for a sub-five percent ABV beer.