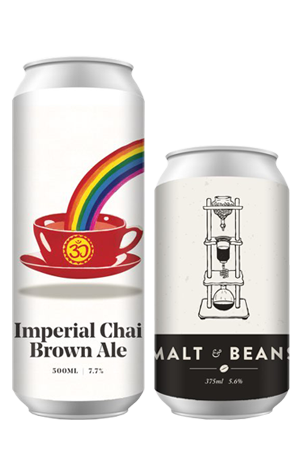 Much as in the endless beer versus wine debate, people can sometimes get a bit protective of their personal preference when it comes to tea and coffee. What perhaps gets lost too easily by both sides, in both arguments, is that it’s quite ok to not place such stringent limits on ones enjoyment of life’s little pleasures. Still, seemingly not wanting to take any chances, the folks at New England have covered their bases with a near-simultaneous releases of a tea beer and a coffee beer.

The first is the Imperial Chai Brown Ale, a beer that drinks more or less exactly as you might imagine from the title: strong, malty and full of spice. The centrepiece is the tea blend which they sourced from the aptly named Chai, a Repton-based business that’s apparently been blending spices from their home a few hours due east of New England for nigh on three decades – well before your average Aussie cafe was offering anything remotely exotic in a cup. The blend the brewers chose to use is called Rainbow Chai (thus neatly explaining the can’s artwork) and it gives the beer punchy aromas and flavours of cinnamon, clove and cardamom. Those sit on top of a very smooth and slightly sweet caramel malt character that hides any hints of the 7.7 percent ABV. It won't take you more than a decent sip to conclude that this is a beer straight from the New England Brewing playbook: a bit weird, but it works.

Beer number two is Malt & Beans, a coffee stout. Putting coffee in this style of beer is far from a new idea – certain dark malts commonly serve up coffee-like characters so the addition of real coffee is an obvious enhancer – but this one seems to have squeezed a lot in, or at least managed to extract every drop of character from the cold brew they poured in (for any coffee nerds reading: they used Lamari Peaberry coffee beans from Papua New Guinea, roasted by Artisti in Coffs Harbour). But the most important thing is that the coffee balances well with the beer, both complementing and slightly contrasting the silky stout base so that what you end up with is something with deep malt characters of roast and chocolate which give way to sweet fruits and earthy spices.

Whatever your own preference of the two, Uralla seems like a great place to be for afternoon tea (or coffee).