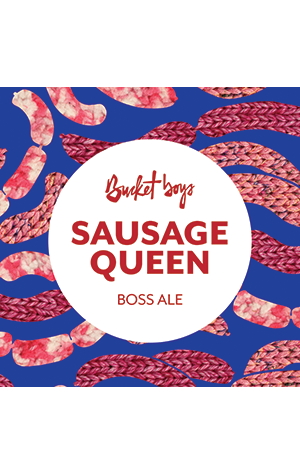 The Germans have long proven that sausages and beer go well together, with their timeless wurst & Weiss combination the default setting for any hastily put together Oktoberfest event. So it’s not new ground Bucket Boys are covering in their collaboration with the folks from Dulwich Hill’s The Sausage Factory, but ground that perhaps doesn’t get the consideration it merits outside of Munich beerhalls.

The brief for this beer essentially came in two parts. The first was to make something that would pair with the meat in a manner approachable to the everyman. The second was that, as a Bucket Boys beer, it required some flair. What they came up with is the Boss Ale.

While based on a Belgian Witbier, to call it true to style would mean bending the guidelines like a boerewors. While that’s a good starting reference point, you get the impression it got tied up somewhere with a farmhouse ale – with a little more funk and phenol – but then it’s got something in common with a pale ale too as there’s a fair bit happening on the hop front to give a quite pronounced lemon and citrus fruit character. There’s more than enough flavour here to match it with a good snag plus plenty of zip to cut through any fattiness yet, as per the brief, it remains light and approachable to the last.

On tap at Bucket Boys Brewing