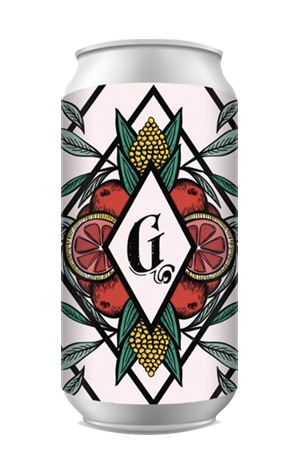 In one corner: New England Brewing Co, a small regional brewery in northern New South Wales. In the other: The Gresham, a suave cocktail and whiskey bar in Brisbane’s CBD. Between them: an unlikely friendship that's existed since the Gresham poured a keg from New England’s first batch of beer in 2013. Half a decade on, it was high time for them to collaborate.

The Gresham is known for its impressive array of American whiskies, and for its use of interesting Australian ingredients in cocktails. Equally, New England Brewing is known as a brewery with a mindset open to exploring the new, often with unusual native ingredients. So, a long discussion between the two led to the idea of a gose with a difference. Instead of using wheat, they took inspiration from bourbon and used predominantly corn in the mash. To add some tartness and bitterness, they added quandong, a native Australian fruit with tastes reminiscent of peach. And, because every good cocktail needs a garnish, grapefruit peel was added too.

The slightly cloudy, straw-coloured beer gives off a zesty scent but, unlike some fruit goses, it isn’t heavy-handed in the aroma department. Nor are the flavours pushy – it’s a refreshing gose first and foremost, with an effervescence and subtle saltiness that relaxes your whole body. But, as you keep drinking, the dry finish picks up a little more tangy acidity from the grapefruit, and a little more depth and tartness from the quandong. Each sip encourages another, until there are no sips left, and it’s time to reach for another.

Whether you’re in country NSW or Brisbane city, you won’t be drinking just one of these.