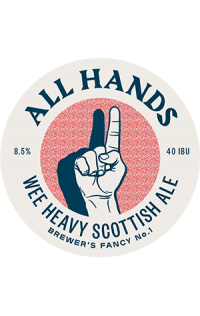 Very shortly after they’d (re)opened the doors to their Darling Harbour venue, the All Hands brewers decided to flex their muscles and see what their new kit could do by way of big beers. The way they chose to travel down this road was parti-gyle style, using the same batch of grain to create a barleywine and a Scottish-influenced Wee Heavy. Just the one keg of barleywine got tapped at the time (with the rest awaiting an opportune occasion to reemerge) while the Wee Heavy has now concluded its time conditioning and has hit the taps.

While in development the brewers had taken to calling it Caber Toss, a metaphor, perhaps, for what they hoped would be a big, strong beer with an unusual degree of elegance. And that’s pretty well what they’ve achieved.

The All Hands Wee Heavy is a delightfully sweet and malty treat, full of raisin, stewed fruit and Port character. Yet it’s not sweet to the point of cloying, the full saccharine sensation being held off by a biscuity base and, more prominently, a lovely hint of Manuka smoke that gives an extra and most welcome dimension. For a beer that weighs in at 8.5 percent ABV it’s a gentle giant, retaining a high degree of drinkability and finishing quite dry while still leaving you with plenty to chew on.