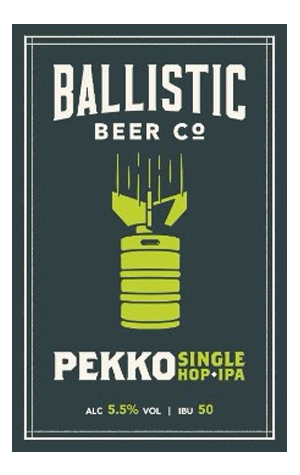 Before Ballistic released its Fortnight Single Hop IPA, few among us had even heard of Fortnight hops, a blend made in the US for Victorian brewery supplier Bintani. We were all impressed by how cutting edge Ballistic was and now they’ve released the Pekko Single Hop IPA, some of us are wondering if they’re just inventing new varieties of hops in their back shed.

The Pekko IPA isn’t a slap-you-in-the-face IPA. It’s clean and refreshing, offering up herbaceous, almost grassy aromas, with hints of cucumber. The malt profile’s been kept in the background to allow the hops to stand front and centre, but the inclusion of Carahell specialty malt adds characteristics reminiscent of a good Czech pilsner – some bready, slightly caramel notes. The hops themselves bring a cleanness you don’t usually get in IPAs – cucumber, mint, light florals, which all fade to melon before delivering a crisp, gently bitter finish.

It makes for IPA that wouldn’t be out of place watching footy with your dad, or having tea with the Queen.