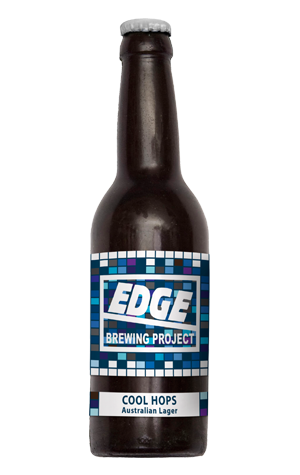 The sole beer in Edge Brewing Project's core range has had quite the storied life. Whether you remember its earliest labels – a cartoon hop in shades riding a surfboard, courtesy of past collaborator Christian Skovdal Andersen of Beer Here – or picked up on the many trophies and accolades the beer has picked up globally over the years, Cool Hops has certainly earned its place.

In keeping with the brewing company's "lagers, imperial stouts and sours" ethos, it's a lager, albeit one with plenty of punch. It's a beer that's evolved from one of Adam Betts' homebrew recipes and was inspired by a trip to New Zealand, where he experienced many hoppy NZ pilsners. That said, this is fuller beer than many of those, with some biscuity malts accompanying the prominent tropical hop characters from its mix of Aussie grown Ella and Galaxy, which are responsible for a pretty significant and slightly resinous bitterness too.