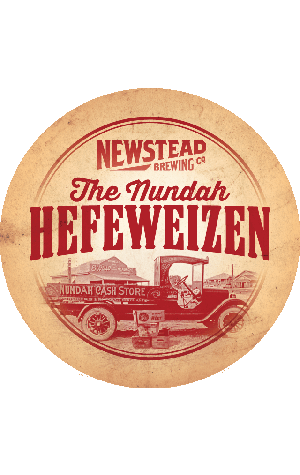 Nundah’s become a little bit more fancy in recent years – specialty coffee and French fusion restaurants, anyone? But it’s traditionally been a working class suburb, first colonised by the Germans, home to strong and silent workers who get in, do their job (and do it damn well), then go home to rest up so they can do it again tomorrow.

This is The Nundah Hefeweizen, one of the Newstead's four yeast-driven seasonals. It’s powerful and efficient, without being overpowering. It takes a reliable, traditional German style that hasn’t been on trend for a while in Australia and unashamedly says: “Drink this. You won’t regret it.”

The Nundah is pungent (in a good way), like that overripe banana that’s been on the bench for a few days too long, making you think: “That’s not gonna be great for eating, but it’ll be PERFECT for banana bread.” And that’s what you get from the very first sip – banana bread. Big, sweet, lingering esters, bringing banana and baking spices but not getting to that uncomfortable chewy state that some hefes reach. The yeast is at the forefront, with just the tiniest hop fruitiness around the edges.

If you come home smelling of hefe after a few of these, just say you were meeting a friend for tea and banana bread. Your better half will be Nundah wiser.