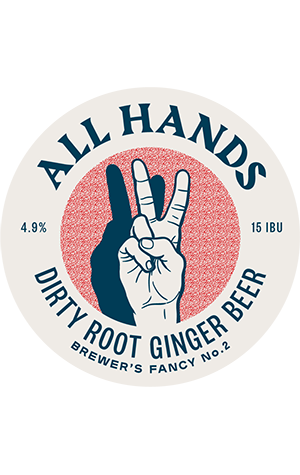 While a lot of brewers are busy playing with fruit these days, All Hands has looked to its roots for its first ever autumn release: a ginger beer. To do so they scrubbed and sliced a few big boxes of fresh and still dirty ginger root before getting busy with the citrus juicer, squeezing several hundred lemons to procure a few litres of juice which was duly tipped into the brew. The result is rather tasty and refreshing.

They’ve billed it, very generally, as a kind of beer alternative for cider drinkers, which is a fair indication of where it sits on the flavour spectrum and the characters it promotes versus those it doesn’t. The malt base, derived from a lager recipe, is very simple while the hops are present in only a minute quantity for bittering purposes, meaning what you’re left with is generous spicy ginger flavour with a touch of citrus tartness and a sweetness that’s pleasing without being cloying.

They also reckon it goes well with a bit of chilli thrown into the glass and, once you try it both with and without, it’s actually hard to disagree. Where they can’t agree is exactly how much chilli to add; one of the brewers reckons a single slice is about right and the other takes six, so how you prefer it depends on how much spice you like in your life. And, if you’re in the mood for further experimentation, talk to the bar staff about getting the Dirty Root turned into a cocktail as they’re being finding all manner of ways to work it in as a mixer – a Dark 'n Stormy would be a good first port of call.