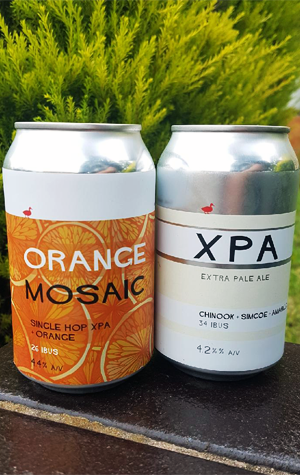 Why release one XPA when you can take one of the styles de jour in two directions at once? That seems to be the intention with Ballarat's Red Duck who have made a pair of XPAs part of their quartet of canned offerings as they open their 2018 account.

The XPA is based off the brewery’s longstanding Pale, with the recipe tweaked to create a beer with less barley and more wheat, resulting in a beer that's lighter than its predecessor and in line with the growing number of contemporary New World pales on the market. The X in the name presumably refers to the extra hops, with the troika of Chinook, Simcoe and Amarillo delivering flavours of pine, melon and citrus accompanied by a building bitterness along the way.

Mosaic has become the favourite hop of many a brewer, thanks to its ability to create an assortment of flavours and aromas ranging from citrus to berry to all manner of tropical fruits. To further emphasise those tropical notes in Red Duck’s second XPA, the Orange Mosaic, the brewers added both mandarin extract and orange juice and zest. It’s a beer which exudes a juicy combination of flavours, with orange prominent but joined by peach, some tropical touches and a healthy dose of mandarin.