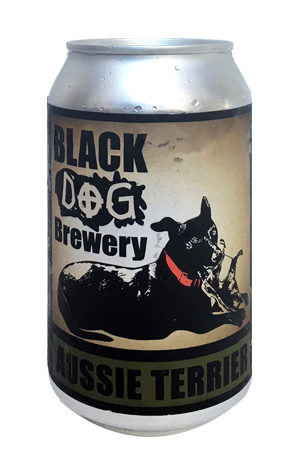 Black Dog brewer James Booth doesn't tend to hold back when it comes to designing his beers, with many nudging at the upper reaches of their particular style. And that's certainly the case with the Aussie Terrier. On the can, James calls it a "sessionable hoppy ale" and it is that, but it's also one that packs plenty of punch.

The main cause is the Aussie hops involved in the mix, with most of those offered by Hop Products Australia making an appearance here. They deliver something of a fruit bowl character – ripe pineapple, passionfruit, mango, stonefruit... you name it, if it's tropical and fruity you'll probably find it in there. There's malt sweetness to round things out and keep the bitterness at a sessionable level but there's no denying the Aussie Terrier is a bold entry into "session ale" territory.