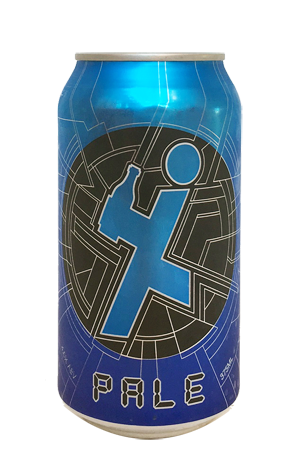 Exit Brewing's core range has always been one of the quirkier out there. Sure, there's nothing barrel aged or sour, for example, but a lineup of Amber, Milk Stout, IPA and Saison is one free of anything in the lager/golden/kolsch/pale arena, making it distinct from most. But, as we head into summer 2017/18, they've relented and made their second canned release a pale ale – and one that heralds a new look for the brewery. The familiar logo is still front and centre, but it's surrounded by imagery inspired by classic 80s movie Tron: a blue metallic sheen and graphics seemingly lifted from an old Atari.

As for the beer inside, it's an evolution of limited release #014, albeit toned down a little. A blend of American hops and Nelson Sauvin from New Zealand deliver gentle mandarin and grapefruit aromas and tropical flavours in tandem with soft, biscuity malts. It appears to be a pale ale designed for repeat drinking too as the bitterness, while drying and slightly resinous, is potent but stops a long way short of being aggressive.