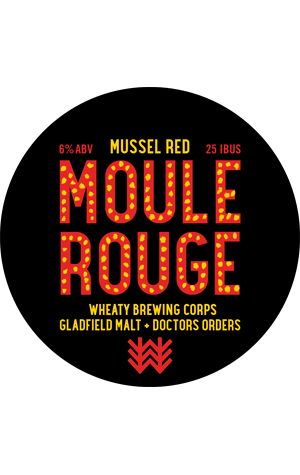 Every year, Jade Flavell and the Wheaty Brewing Corps team up with Darren "Doc" Robinson when he's town for Good Beer Wheaty. In 2017, Gabi from Gladfields Malt in New Zealand jumped in to the brewery too, bringing some red, malty goodness with her. Vienna was used as the base in a beer designed to showcase Gladfield’s Aurora, Supernova and Shepherd’s Delight malts. In typical Doc fashion, he wanted to shake things up a little, which here meant the addition of Boston Bay Mussels and oysters for an extra salty hit. Belma hop hash was used to balance out the malty, salty masterpiece.

Just like the waters in which the mussels and oysters were farmed, Moule Rouge too has a cloudy murkiness to it, with Gladfield’s malts adding off a deep red hue. Holistically, there is a kaleidoscope of aromas and flavours in this beer with each of the three key components shining through without being dominant. The Belma hop gives off a tropical, citrus twang both in the aroma and flavour. The Aurora, Supernova and Shepherd’s Delight add toffee and a little bit of nuttiness, while the mussels and oysters reduce the malt sweetness with their saltiness. Definitely not your traditional red ale – it's a little out there, a little different yet balanced gracefully.