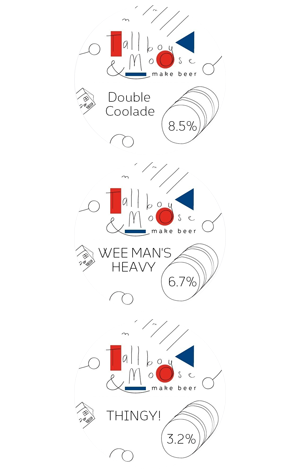 The rate at which Tallboy and Moose pumps out new beers from its small, Frankenstein's monster of a brewery is quite remarkable. In just a few weeks between visits, another half a dozen new beers had appeared on tap, with these (along with the imperial stout that came second in our public blind tasting there) the most recent arrivals.

Double Coolade is their latest and biggest iteration of a New England style IPA. It's got the cloudy haze, the citrus juice character from Kiwi and American hops Motueka, Amarillo and Mosaic and a vanilla character too. What it doesn't have is much to notify you it weighs in at 8.5 percent ABV.

Wee Man's Heavy is a beer brewed in honour of the opening of their brewery kitchen. "Wee Man's Kitchen" is owned and operated by skipper's hat-wearing Scottish chef Chris "Skillz" Orr, who is knocking out dishes inspired by working class Scottish dishes (including those featuring haggis). His wee heavy is a lightly peated 6.7 percent ABV Scotch ale: low in carbonation, high in rich, sweet malts and raisin like fruitiness, with just a hint of peat smoke.

Meanwhile Thingy, which brings back memories of a classic Blackadder episode, is Tallboy's latest crack at a small beer with big flavour, a ruddy brown drop dry-hopped "to high heavens" with Ella, Centennial and Mosaic. Its relatively light body belies its 3.2 percent ABV size, but that's all that does, with flavour and aroma dominated by choc orange and grapefruit.