Beer Tallboy and Moose & Carwyn Cellars Dark Side Of The Moose 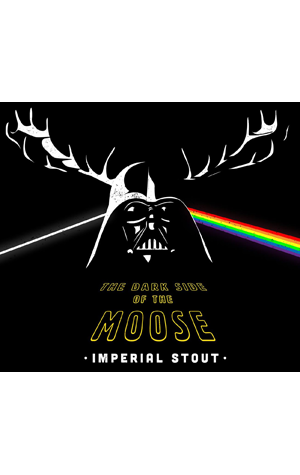 For the most part since they first opened the doors of their Preston brewpub, Tallboy and Moose have focused on making tight and generally lower ABV beers. That's certainly not the case here. Dark Side Of The Moose is the first imperial stout they have brewed since their We Make Beer days and the biggest beer the pair has brewed full stop. They've been joined by their mates at Carwyn Cellars for this brew too, creating a beer they're calling a "big daddy of an imperial stout".

We've yet to taste it – although we suspect it will be appearing at our Getting Blind With Crafty event with them on August 23 – but the duo tells us: "The force is strong in this one." They say to look out for "flavours of dark fruit covered in dark chocolate covered in dark beer" created by a complex malt bill featuring specialties like wheat, Special W, Dark Crystal, roast barley and pale chocolate malt. The brewers also tell us that "a firm bitterness plays a supporting role, standing out just enough to hold the beer back from being sweet" and conclude that it is a "very easy drinking and smooth iteration of Russian imperial stout, due to its extended time – seven weeks – conditioning in tank."

If you're in Melbourne and reading this on August 18, you can join Tallboy and Moose as they launch the beer from 6pm – alongside three other new releases – at Carwyn Cellars.