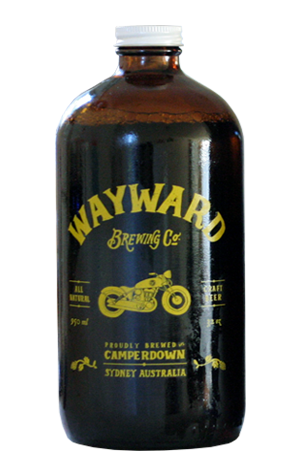 There is no moment in one’s life comparable to the birth of a first child. For the parents, in that instant – consciously or not – everything changes and a once familiar way of life begins a gradual demise, shifting its boundaries to make room for something infinitely more complex, confusing, terrifying and wonderful. It’s a big deal, and it’s worth celebrating. So when one of the parents of a new baby is a brewer, a quite natural thing to mark the occasion is with a special beer. At Wayward, head brewer Shaun's recent arrival is the first child to be welcomed into the wider Wayward family since the brewing company was launched so was anointed The Wayward Son and granted a new beer in his honour.

In coming up with a concept there must, surely, have be temptation to aim for something particularly extravagant – something robust, in a typical anniversary ale fashion, that will develop well with age and can be pulled out of the cellar, a bottle each year, in wistful reflection. Wayward Son is the opposite. It is a celebration of the moment, something full of freshness and life and joy. It’s a West Coast IPA that is unconventional and a bit special in that it uses lupulin powder, a concentration of hops which, in principle, is intended to capture hop flavours and aromas with an atypically low level of astringency. The Wayward Son showcases these characteristics in a riot of full fruit flavours – think apricots, passionfruit and mango – with a piney, resinous accompaniment. It’s clean and dry and any bitterness therein exists to balance things out, not to be a feature. Just like a newborn, this is sheer delight.

On the theme of things arriving after a lengthy gestation, Wayward also chose the arrival of The Wayward Son to release Big Richard, a strong German lager. More specifically, it’s a near ten percent ABV American oak aged doppelbock and it’s also a delightful drop, but in quite a different way to its sibling. Where The Wayward Son is about the fruitiness, Big Richard is rich and malty, oaky and smokey. For its weight, it drinks with very little heat or menace, just a touch of residual sweetness that rounds out a fine pair of beers.