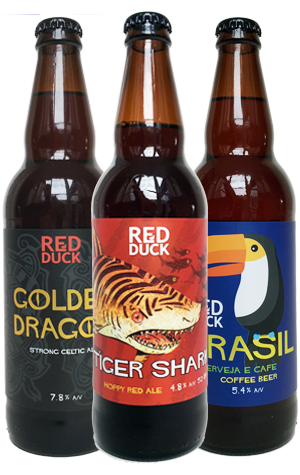 You just can't slow the man down. Yes, here's another round of limited release beers from Ballarat's Red Duck Brewery. Admittedly, one of them, the Golden Dragon isn't new, but an old favourite of the brewer's making a reappearance. Tagged a strong Celtic ale, it's all about the sweet, fruity malt, alcohol and yeast characters: within its blood orange depths you'll find sultanas and dates, toffee, treacle, brown sugar and the like. Low carbonation ensures it's a sipper for the sweeter toothed among you.

The Tiger Shark is a beer we're seeing a little more of these days. It's a hoppy red – the sort we featured in our last blind tasting – albeit one that comes across as more of a highly hopped English amber ale. The hops appear late on, creating a steadily building and ultimately lingering earthy, grippy bitterness behind the upfront caramel and toasted malts.

As for Brasil, it's the latest beer from Red Duck to make a feature of coffee, in this case Arabica beans roasted by near neighbours Charisma Coffee, who sourced them from, you guessed it, Brazil. Rather than pair the coffee with a dark beer style, here the idea is to lay it alongside a pale beer base and give the coffee free rein. As has often been Scott's wont throughout a dozen years of experimentation, it makes for an atypical experience: nutty coffee aromas hit first, but there's an almost lactose like sweetness there too, followed by dark honey like malt flavours and little in the way of roast or bitterness.

NB: The Ox imperial stout is also making a comeback after a few years away.