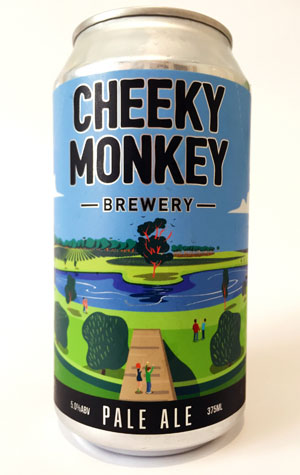 Cheeky Monkey’s fifth birthday celebrations included a present to themselves: new branding and new recipes. Under the gift wrap were such things as the Travelling Monk Session Red mainstay now packaged in a responsibly sized 375ml can, an award-winning Australian Lager and the debut of this American style Pale Ale. Once an outlier, the West Coast IPA released at Christmas last year now also looks very much a part of its familial troupe, with the tallboy cans saved for single batches such as the Silverback Imperial Stout.

Sitting in the middle of the new clan style wise, the Pale Ale maintains an initial citrusy bitterness thanks to a combination of Simcoe, Fortnight and Bravo hops without becoming overwhelming and, judging by the can art, it's best enjoyed at the brewery overlooking the dam. For those not in the Margaret River region, however, it’s available from leading Perth retailers and venues as wells as selected locations throughout the South West of Western Australia.